Comprehensive fire safety doesn’t stop once a fire risk assessment has been completed or a fire alarm installed. Instead, there are a number of things you must be aware of if you own or run a commercial environment and, depending on the nature of your business, one of the most important considerations is explosives and dangerous substances.

Flammable gases, mists, vapours or dusts can, when in a high enough quantity and mixed with oxygen, become combustible and, in the presence of a source of ignition, can easily and readily explode.

The Dangerous Substances and Explosive Atmosphere Regulations (DSEAR) 2002 dictates that employers must assess and manage the risk of these substances in the workplace. This means evaluating the risks present within their particular environment – including the substances present and the work activities which could contribute to an explosion – and then removing or reducing these risks.

According to the Health and Safety Executive, most dangerous and combustible substances can be categorised into four groups – liquids, dusts, gases and solids. 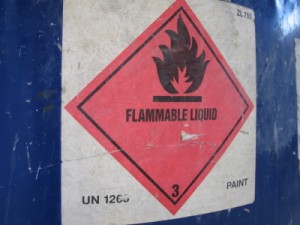 In general terms, an ‘explosive’ liquid is one which can catch fire – and these are commonly known as flammable liquids and include things such as petrol and other fuels. This bracket, however, also includes solvents used in industrial products, such as paint, ink and adhesives, as they all give off a combustible vapour which could ignite when mixed with oxygen.

You may be surprised to learn that dust can be a combustible material.  However, some types of dust can form explosive atmospheres. This happens when combustible dust is suspended at a high concentration in an oxidant (typically oxygen) and this could then lead to an explosion if the combustible dust cloud came into contact with an ignition source.

Dangerous dusts are usually found in industrial environments, such as coal mines and saw mills, as it is commonly materials which oxidise that generate dust explosions (coal, sawdust, magnesium). However, other materials have also been known to cause dangerous dust clouds, including grain, flour, sugar, powdered milk and pollen.

Combustible gases can be extremely dangerous when released accidentally or in an unrestricted environment. The main types of explosive gases are natural gas, methane, propane and butane as these gases are all used for heating purposes and, as such, are often found near to ignition sources.

Other gases though can be combustible and have caused dramatic gas explosions in the past, including hydrogen.

There are many solids which are flammable and can easily and quickly aggravate and intensify a fire, such as paper, packing and fabrics. However, there are some combustible solids which burn fiercely and give off a dense black smoke when on fire. These solids can be particularly dangerous – even poisonous in some instances – and should be properly managed within commercial or residential environments.

Most fires are preventable, and dealing with potentially dangerous substances within your environment responsibly, and in accordance with the DSEAR, can greatly reduce the chance of an explosion or fire occurring.

For more information on fire safety regulations and the best way to protect your business from the threat of fire, get in touch with the professionals at City Fire today!