Help and Advice When Would It Be Dangerous to Use a Carbon Dioxide Fire Extinguisher?

You are here: Home » News » When Would It Be Dangerous to Use a Carbon Dioxide Fire Extinguisher?

When Would It Be Dangerous to Use a Carbon Dioxide Fire Extinguisher?

In this article, we’ll detail the situations where a carbon dioxide extinguisher could be dangerous to use, as well as how they work and when and where you ought to be using them to tackle a fire.

What are the risks with a carbon dioxide fire extinguisher? 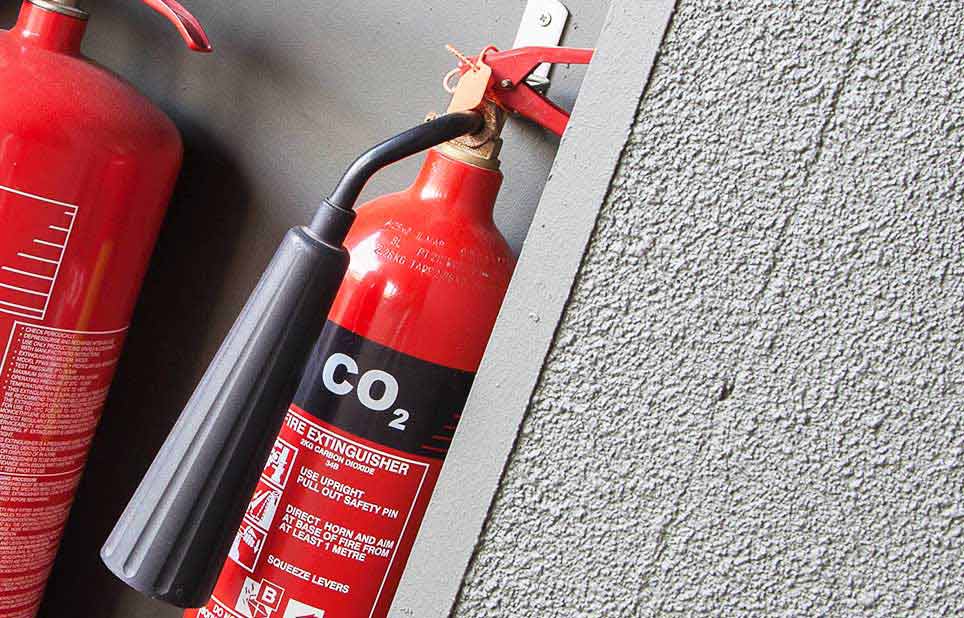 Asphyxiation – If a carbon dioxide extinguisher is used in an enclosed or poorly ventilated area, there is a serious risk of asphyxiation.

Higher pressure – When discharged, the carbon dioxide in the extinguisher turns from liquid into gas. The working pressure is roughly 55 BAR (compared to 12 BAR in a water-based unit), this means that if someone were to attempt to use the extinguisher without the proper hose and horn fitted, there is a good chance the kick from the unit could cause injuries. This includes wrist strains, or at worst, a broken wrist.

Quicker discharge – Due to the higher pressure, there is a quicker discharge on a CO₂ unit. This means that anyone using this extinguisher type should be certain they can put out the fire fully before trying to tackle it as it will quickly spend the contents once started.

Frost burn – When the CO₂ turns from a liquid into a gas during discharge, the temperature is extremely low. Frost burn is a real risk if the user does not hold the unit in the right way or if the extinguisher is not provided with a frost-free horn.

Electrical risks – If tackling an electrical fire, there is the obvious risk of electrocution if the user attempts to investigate the fire once they think it’s extinguished. It’s always best to cut the electricity supply completely via emergency shut-off switches so that it’s safer to check that the fire is completely out – or, ideally, isolate the power supply before even attempting to extinguish the fire.

What is carbon dioxide?

Carbon dioxide, or to give it the proper chemical formula name, CO₂, is found in plenty of places, from our fizzy drinks to the greenhouse gases which we associate with climate change. It’s a colourless gas with no smell, made of two oxygen atoms combined with one carbon atom.

Carbon dioxide isn’t all bad though, since it’s what plants produce when photosynthesising and it’s especially handy when trying to tackle a fire. Here’s why…

Why is carbon dioxide used in fire extinguishers?

We use carbon dioxide in fire extinguishers because it displaces or reduces the amount of oxygen in the atmosphere around the fire. If you’re familiar with the fire triangle, you’ll know that oxygen is one of the three basic things a fire needs to start and keep spreading. By removing the oxygen from the formula and smothering it with discharged CO₂ gas, the fire will be extinguished.

Learn More About The Other Fire Extinguisher Types Here

What is a carbon dioxide fire extinguisher used for?

A Class B fire usually involves some sort of flammable liquid such as petrol or oil (not cooking oils or fats). This means they’re ideal for businesses where these liquids may be present such as auto garages, workshops or manufacturing plants. The carbon dioxide displaces oxygen and cools the temperature of the liquids.

Electrical fires are exactly that: fires started because of electrical faults – this can be overloaded equipment or wires which have been damaged. Where electricity is involved, you need to be careful not to make the situation worse, which is why a carbon dioxide extinguisher is needed. This will allow you to put out the flames without risking more damage and more electrical faults, something you’d risk if you were to use a water-based extinguisher. Server rooms, or any area with large amounts of electrical equipment, are where carbon dioxide extinguishers are best suited in this instance.

Whether you need advice on the right units for your business, maintenance or replacement of your current units or training on extinguisher usage for your staff, simply contact our professional team today and we’ll be happy to assist you.